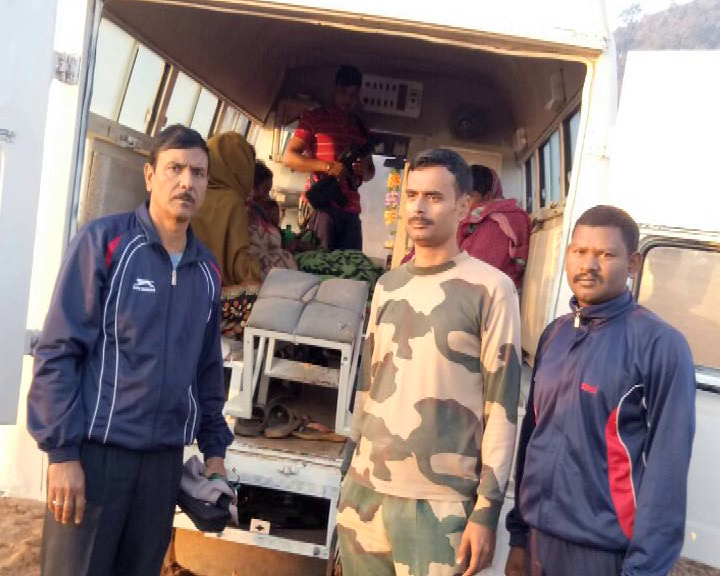 Malkangiri: Setting another example of humanity beyond duty, the BSF jawans in the cut-off area of LWE affected district Malkangiri helped a pregnant woman to cross Gurupriya River and admitted her to hospital for delivery.

The timely arrival of the pregnant woman, who was critical in condition, in the hospital saved both the mother and child.

The BSF jawans were highly lauded by the locals and family members of the woman for their noble action in the tribal district.

According to reports, the pregnant woman identified as Rukuna Kanchai and wife of Dambru Kanchai of Janbai village under Papermetla police station limits was admitted to a nearby hospital after she complained of labour pain yesterday.

As there was no facility for delivery in the hospital, her condition deteriorated. On being informed about the incident, some BSF jawans of Janbai camp reached the hospital and ferried the pregnant woman to Chitrakonda crossing Gurupriya River through their speed boat. The woman was admitted to the Chitrakonda Community Health Centre (CHC), where she delivered a baby boy.

Both the mother and newborn are in good condition, a family member said.

This is not the first time the BSF jawans could be appreciated for their timely action that saved a pregnant woman. Recently in February, two BSF jawans were hailed for showing their humanity beyond duty. They helped a pregnant woman to reach hospital in cut-off area of Malkangiri district.

Biju Patnaik’s Dakota-themed restaurant in Bhubaneswar airport is a must-visit!