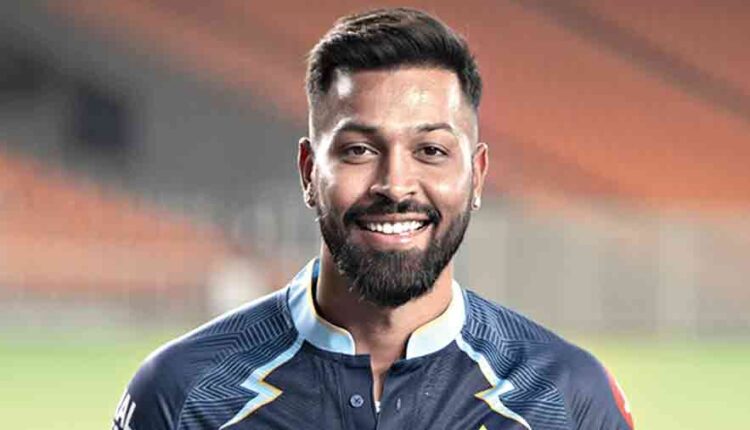 Navi Mumbai: Former India cricketers Irfan Pathan, Sunil Gavaskar and Aakash Chopra have been left impressed by Hardik Pandy’s showings as a captain and all-rounder of Gujarat Titans in IPL 2022.

In the ongoing tournament, the Pandya-led Gujarat Titans are at second place on the points table with 10 points from six matches.

Though Pandya didn’t feature in Gujarat’s thrilling come-from-behind win against Chennai Super Kings, the all-rounder has been a chief factor in the newbies of IPL circuit quickly becoming a force to reckon with.
Pandya is the leading run-scorer for Gujarat, making 228 runs at an average of 76 and strike-rate of 136.52 while batting at number four.

With his right-arm pace, Pandya has bowled 18.3 overs, hitting the 140kmph mark consistently while picking four wickets at an economy rate of 7.56.
“This is a new Hardik Pandya. This is a better version of him. It was nice to see the situations in which he has played this season. The good thing about Hardik is that he is batting responsibly at No. 4.

“You don’t get to take too many chances after wickets fall early but Hardik didn’t shy away from playing big strokes early in his innings for GT if he got the looseness from the bowlers. Whether it is Team India or Gujarat Titans, Hardik is the most suited batsman at number four. This is because he can take the responsibility,” said Pathan on Cricket Live show on Star Sports.

IPL 2022 serves as a comeback into competitive cricket for Pandya after the Men’s T20 World Cup in the UAE in October-November last year. In the period between the World Cup and IPL 2022, Pandya was seen working on improving his fitness levels to fulfil his duties as an all-rounder. Gavaskar lauded him for working on his fitness and producing sterling performances with the bat.

“He didn’t play a lot of cricket before the IPL because he was trying to get fully fit with all the problems he had due to the injury. (Now) Look at the discipline he’s showing in his batting. He’s batting well in the powerplay and making full use of the field restrictions, he’s doing exceedingly well in the field. So basically, that thinking cap is on; and once that happens your game just goes up.”

Chopra reckons Pandya has learnt captaincy lessons from MS Dhoni and is now applying them perfectly in the Gujarat set-up in IPL 2022. Pandya has been a lot of praise for making Gujarat function like a well-oiled unit in the tournament.

“I think Hardik obviously treats him (MS Dhoni) as his mentor, he’s very close to MS. The number at which he bats and the role that he plays, nobody has played it better than Dhoni in the history of white-ball cricket.

“He’s learnt the right lessons from MS. These are the things that we don’t even have to be told, we just observe. When we are in the company of greatness, we try and take little pieces and it shapes our lives. And that’s what we are seeing with Hardik.”