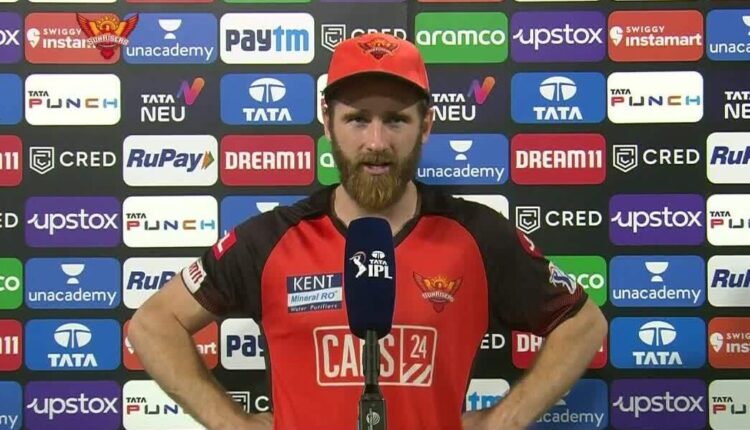 Pune: Sunrisers Hyderabad skipper Kane Williamson’s “painfully slow” batting in powerplay is drawing criticism from the team’s fans, many of whom have called the New Zealand skipper an “average T20 batter” and blamed him for the 13-run loss to Chennai Super Kings at the MCA Stadium here on Sunday night.

Riding on a 57-ball 99 from Ruturaj Gaikwad and a belligerent unbeaten 85 off 55 deliveries from Devon Conway, the defending champions amassed 202/2 and then restricted the Williamson-led SRH to 189.

Coming in to bat with a mammoth run-chase staring them in the face, Williamson scored 47 off 37 deliveries at a below-average strike rate of 127, the second lowest in his side’s innings. SRH wicketkeeper-batter Nicholas Pooran, who came down the order, tried his best to overhaul CSK’s total with a belligerent 33-ball unbeaten 64 (strike rate 194) but the total was too daunting and the Hyderabad franchise lost by 13 runs.

Fans were quick to blame Williamson for the close defeat, trolling the New Zealander, who has been plagued by an elbow injury for a long time and has missed quite a few matches for his national side.

“Again Kane Williamson lost another match to SRH. Absolutely ridiculous batting while chasing 10+ RPOs (runs per over). Unfit to play T20 cricket #SRHvCSK,” tweeted a fan, while another wrote, “#KaneWilliamson has to either STEP UP as an opener or GIVE UP as an opener. But the time for steeping up has crossed the limits. His ODI batting (Strike Rate less than 100) in T20 Format is costing #SRH!!”

Former India cricketer Deep Das Gupta said on Cricketracker that SRH generally start slow, adding that “Kane Wiliamson is not converting ‘starts into big ones’. He also opined that because everyone else in the side is contributing more, the New Zealander can “afford to play more freely”.

‘Time to go to the real masters’, Prashant Kishor drops hint on next step