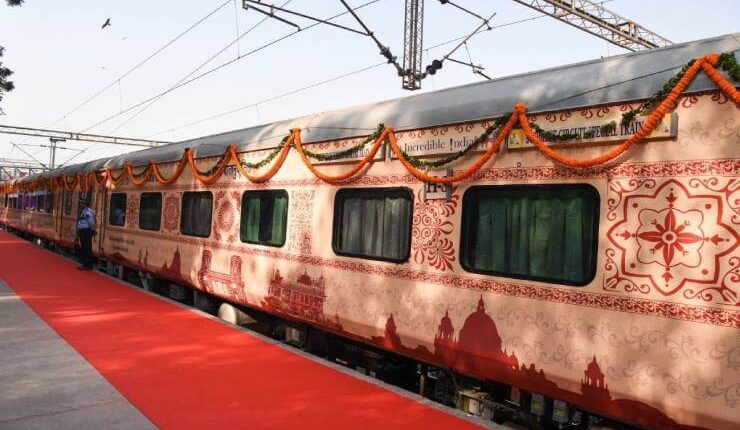 According to an official release, the journey would take 18 days on an 8,000 km long circuit which will kick-start from Delhi.

What makes the package even more lucrative is the fact that there is an EMI option to pay the fare.

The ticket price per person would start from Rs 62,370 per passenger which will have an inclusive tour package, including 3 AC tier charge, night stay at hotels, meals, sightseeing in buses, travel insurance and services of guide.

For the EMI option, the IRCTC has tied up with Paytm and Razorpay payment gateways.

An IRCTC spokesperson said: “The maiden Bharat Gaurav train service would commence on June 21. There would be 11 AC three tier coaches with capacity of 600 passengers. The train’s first stop would be Ayodhya, where tourists will visit Ram Janmabhoomi temple, Hanuman temple, Bharat Mandir at Nandigram. After Ayodhya, the next destination would be Buxar where the tourists will be shown the hermitage of Maharishi Vishwamitra and the Ram Rekha Ghat where the guests can take a holy dip in the Ganga.”

The train will then travel to Janakpur (Nepal) via Jaynagar.

In Varanasi, tourists will be given a tour around the temples at Varanasi Sita Samahit Sthal, Prayagraj, Shringverpur and Chitrakoot will be covered by road.

Night stay at hotels will be provided at Varanasi, Prayagraj and Chitrakoot as well.

Train journey on the next leg would be to Nasik to visit Trimbakeshwar temple and Panchvati. Next destination after Nasik would be the ancient city of Kishkindha, Hampi with overnight stay at hotels.

Here the guests will visit the temple believed to be the birth place of Hanuman atop the Anjanadri Hills and other heritage and religious sites.

Rameshwaram would be the next destination of the train tour, wherein Ramanathaswamy temple and Dhanushkodi will be covered along with overnight stay at hotels.

Further, passengers would be taken to Kanchipuram where Shiv Kanchi, Vishnu Kanchi and Kamakshi temples are on the day’s excursion. From here, the last destination that the train would cover is Bhadrachalam in Telangana which is also widely referred to as the Ayodhya of the south.

After this, the train will return to Delhi on the 18th day of its journey covering roughly a distance of around 8,000 km.

The train would have two additional coaches for luggage and a pantry car for the freshly-cooked vegetarian meals.

The train would have an infotainment system, CCTV cameras and security guards in each coach for tourists.