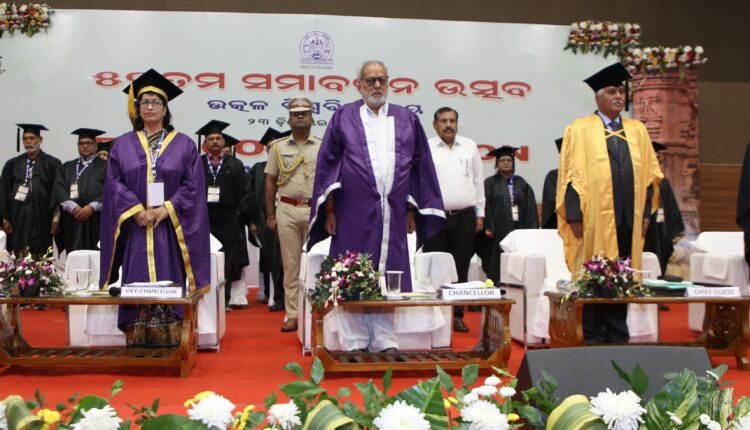 Bhubaneswar: Personal values and principles can provide students with a foundation for success in learning, said Governor and Chancellor Ganeshi Lal at the 52nd convocation of Utkal University here today.

Lal urged the degree awardees to introspect about the values and principles that they stand for. Stressing the importance of personal values, he asked the students to reflect on what kind of person they want to be in the future. He urged the graduates to try to give back to their family, society and country which have nurtured them during the most significant phase of their life.

“My advice to you would be to combine compassion with knowledge, which will help our nation to march ahead on the path of progress while promoting a culture of care and fellow-feeling” he said.

The true value of education extends beyond classrooms and formal degrees, it reflects in the imbibing of an undeterred willpower and a strong character, said Justice V. Gopala Gowda, former Judge of the Supreme Court of India and former Chief Justice of Orissa High Court.

Delivering the 52nd convocation address, Justice Gowda said true education is like a barter system where it is imperative for students to pay back to the society and country which have contributed to their education and success so far.

Quoting Swami Vivekananda’s idea of success, he said, “Take up one idea. Make that idea your life–think of it, dream of it, and live on that idea. Let the brain, muscles, nerves, every part of your body, be full of that idea, and just leave every other idea alone.”

He urged the students to set long-term ambitions but always be ready to change course when the need arises. “It is critical to cultivate a degree of nimbleness”, he said.

Speaking on the occasion, Higher Education Department Principal Secretary Bishnupada Sethi emphasized the need to reframe educational practices so that students can become global champions of sustainable development. He urged students to include key sustainable development issues like climate change, disaster risk reduction, biodiversity, poverty reduction and sustainable consumption in whatever projects they undertake in the future.

“It is social awareness and sensitivity that can usher the change we dream of,” he said.

Vice Chancellor Sabita Acharya gave the welcome address and said the institution’s future will always be based on inclusion, diversity and innovation. Registrar Avaya Kumar Nayak presented a brief report of the institution highlighting the various achievements of the university in the past one year.

and philanthropist and Dr.Tessy Thomas, distinguished scientist and Director General-Aeronautical Systems (AS), DRDO, were conferred with the Honoris Causa.

As many as 163 scholars received their doctorate degrees and 99 students were awarded gold medals across various disciplines.