Odisha: Schools shut in twin city due to heavy rain 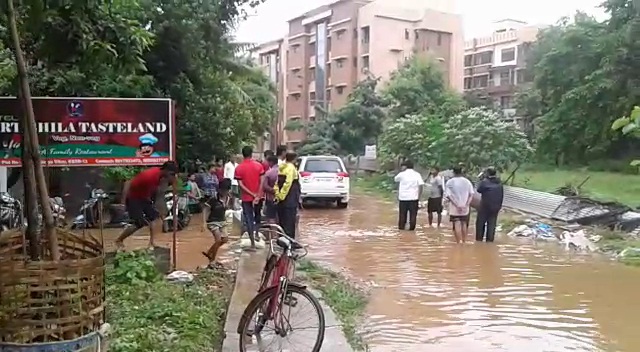 Bhubaneswar: All the schools and colleges both government and private were shut due to incessant rain in twin city Bhubaneswar and Cuttack, announced Special Relief Commissioner Bishnupada Sethi here this morning.

As the major roads have been inundated and the water entered into the houses in most parts of the twin city, the authorities announced holiday for today.

The heavy rain caused by a well-marked low pressure area over northwest Bay of Bengal disrupted the normal life.

The twin city Bhubaneswar and Cuttack were literally floating on the rain water due to incessant rain since last night. The situation worsened in the morning when people could not come out of their houses and the roads were completely submerged in the water due to poor waterlogging system.

In the morning, the schoolchildren were stranded waiting in knee-deep water for their school buses, which were either halted midway or could not arrive the stoppages to carry the students from houses to concerned schools.

In view of the situation, the authorities decided to make the schools and colleges off for the day.

Meanwhile, IMD predicted heavy to heavy rainfall in 19 districts in the next 24 hours.

This Odisha-born Zumba instructor just made foreigners dance to a popular Odia song!