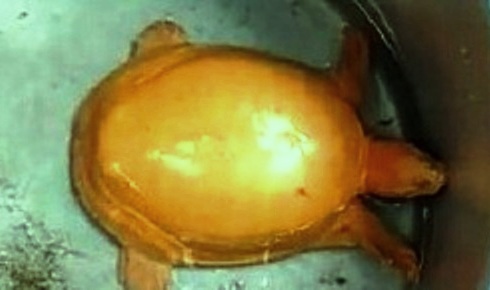 The unique freshwater turtle found in Bentalpur village under Chandbali police station area is golden in colour and weighing over two kilogram.

“The rare turtle was spotted by Nirakar Mohanty in his paddy field when he was working there on Sunday. He informed the forest range office after rescuing it,” said Subash Nayak, Forest Range Officer, Chandbali.

A forest department team visited the village and took steps for the safety of the rare animal, he said.

Divisional Forest Officer, Bhadrak, Purnima Pandian, said that arrangements are being made to release the turtle in the Baitarani river near Chandabali.

A large number of people from the village and nearby areas had gathered to catch a glimpse of the golden turtle.