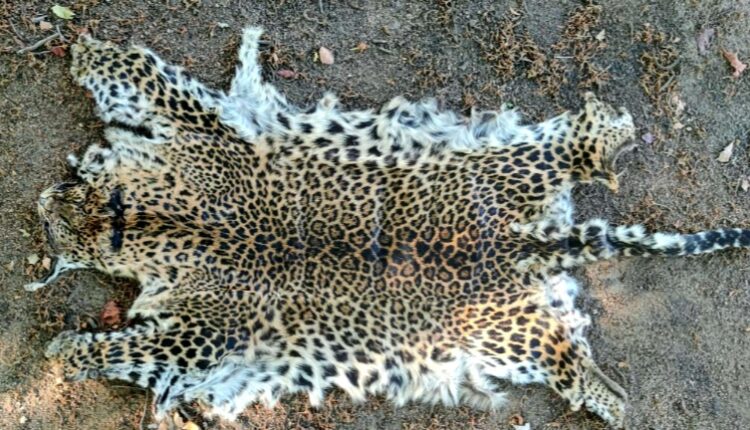 Balangir: Continuing its crackdown on wildlife traffickers, the Special Task Force of Odisha Crime Branch (CB) arrested a person and seized a leopard skin from his possession on Tikarpada-Saintala road under Saintala police limits in Balangir district last evening.

Acting on reliable input on , a STF team with the help of Balangir forest officials conducted a raid last evening and nabbed one Adikand Gheewala of Tikrapada area under Saintala police limits in Balangir district. During search, a leopard skin and other incriminating materials were
recovered from his possession.

As the accused failed to produce any document in support of possession of the leopard skin, the STF detained Adikand and handed him over to Balangir forest officials for necessary legal action.

Further inquiry in this connection is underway, source said.

“Special drive against wildlife criminals or poachers continues to be carried out.  Since 2020, STF has seized as many as 28 leopard skin, 24 elephant
tusks, seven deer skins, 13 live pangolins, over 30 kg pangolin scales, two leopard teeth, 29 leopard claws and 46 wild parrots. Besides, 68 wildlife criminals have been arrested in the cases,” said STF.

Cyclone Asani to form over Andaman Sea by May 8; Check details