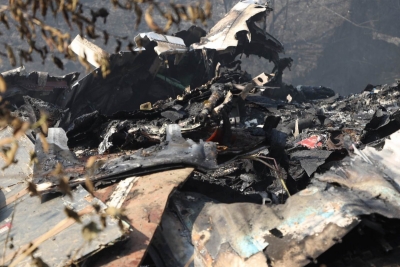 Kathmandu: With the second body recovered at the crash site of a Nepali passenger plane in central Nepal on Tuesday, 71 bodies had been found with the last missing victim remains to be confirmed, an official said.

“We have found one more body in the Seti River,” Guru Datta Dhakal, assistant chief district officer of the Kaski district where the ATR-72 aircraft crashed, told Xinhua.

“So the total number of bodies recovered has reached 71.”

A Yeti Airlines plane crashed into the Seti river gorge near the city of Pokhara on Sunday when it was flying from Kathmandu to Pokhara with 72 people on board, Xinhua news agency reported.

A total of 69 bodies had been recovered by Monday evening with the 69th found in the Seti river, and both black boxes of the ill-fated plane were retrieved on Monday.

The 70th body was recovered at the crash site early Tuesday.

Legs supposed to be from the 72nd person had been recovered, “however, we’re yet to ascertain it,” said Dhakal.

“The rescue effort has been ceased for today. It will resume tomorrow morning,” he added.