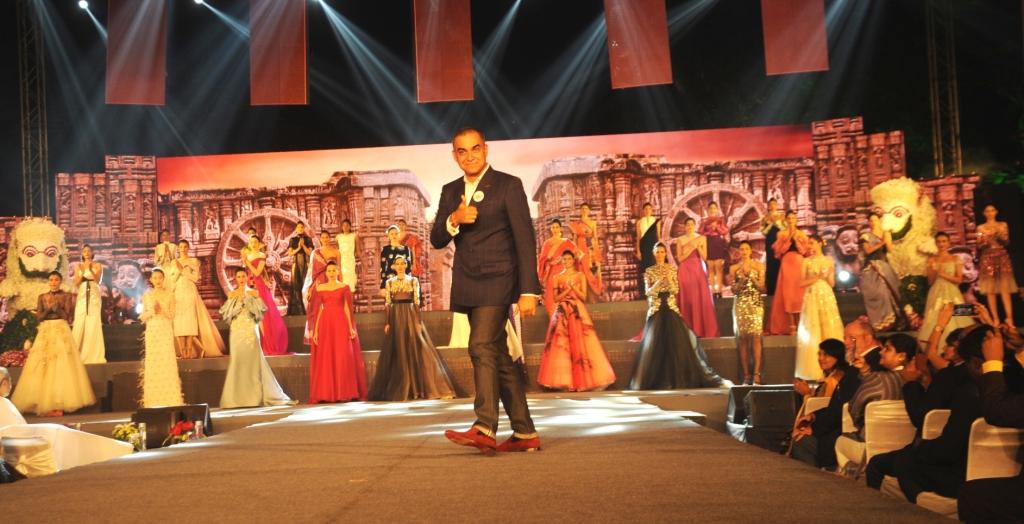 Ollywood actor Archita Sahu posed as the showstopper for the show wearing an elegant yet simple handloom saree draped and secured with a tiered belt-like waistband, with the iconic Sun Temple of Konark in the backdrop.

Prior to the show, in a chat with Odisha Skill Development Authority Chairman Subroto Bagchi, Mohapatra spoke about his journey from Rourkela to the haute couture ramp of New York.

“In the beginning of it all, I used to cut out my mother’s sarees and bed sheets at home to design clothes. Incidentally, I learnt stitching from my mother. I travelled to Kolkata and from Rourkela to the United States for a degree in commerce,” he said. As a Bachelor of Commerce from the Municipal College, he went to Utah State University in the US for his master’s degree.

He narrated his experiences of working part-time to meet his expenses, whilst a student at the university; how he got a job of cleaning rooms in a five-storeyed hotel. Later, his professor saw his sketches and encouraged him to join design school.

A seat in the reputed Fashion Institute of Technology (FIT) in New York put him on a roll in the fashion track. Interning with the luxury fashion house Halston after class, he went on to work with designer J. Mendel as the design director.

He also narrated how he received a call from US President’s Air Force One to design and dress the then First Lady Michelle Obama. In 2008, he launched his own label BIBHU MOHAPATRA and has the who’s who of Hollywood in his international clientele.

Calling Odisha his ‘launch pad’, he said that though he spends a lot of time in New York, he does remember Akhaya Mohanty’s songs, Gopinath Mohanty’s writings and the mesmerizing Odissi dance of Guru Kelucharan Mohapatra and Sanjukta Panigrahi.

Mohapatra urged budding entrepreneurs to strike a balance between professional and personal life. He stressed on the importance of creativity and good public relations in any business model.