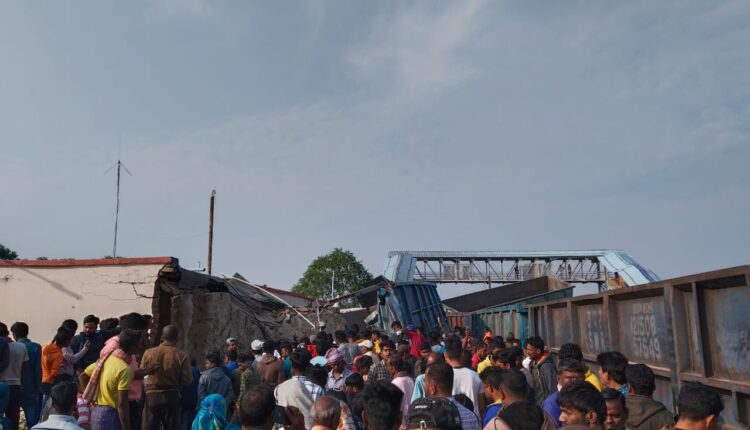 Jajpur: A woman and her daughter, who were waiting for a train to reach SCB Medical College & Hospital in Cuttack, died in the goods train derailment at Korai railway station in Jajpur district, today.

The accident also claimed the life of another woman who was heading towards Cuttack to buy medicine for her differently-abled husband.

The deceased have been identified as Parvati Bindhani (57), Kandhei Bindhani and Abjun Bibi (47).

According to reports, Parvati, her daughter Kandhei, son-in-law Balaram Bindhani and grandson Biswajit were at the waiting hall of the station, this morning. They were waiting for a passenger train to reach the SCB Hospital for Kandhei’s MRI scan as she had developed tumor in abdomen.

Tragedy struck as the freight train heading towards Chhatrapur from Dongoaposi derailed at the station while some of its wagons rammed into the waiting hall at around 6.44 am. Parvati and Kandhei were crushed under the wall of the waiting hall, which collapsed due to the impact of the collission.

Balaram and Biswajit sustained injuries in the incident and were treated at a hospital. They were later discharged.

The deaths have left their family members devastated and shocked as the victims had left the house mere 20 minutes before the accident.

On the other hand, Abjun Bibi of Fazalpur village under Korei block was waiting for the train to go to Cuttack for purchasing medicine for her husband when the accident took place. She died on the spot.

Chief Minister Naveen Patnaik expressed deep grief at the loss of lives and announced ex-gratia of Rs 2 lakh each to the next of the kin of the victims while conveying his deep sympathy to the bereaved families.

The Railway department has also announced compensation of Rs 5 lakh each for the families of the deceased, Rs 1 lakh for critically injured passengers and Rs 25,000 for those with minor injuries.