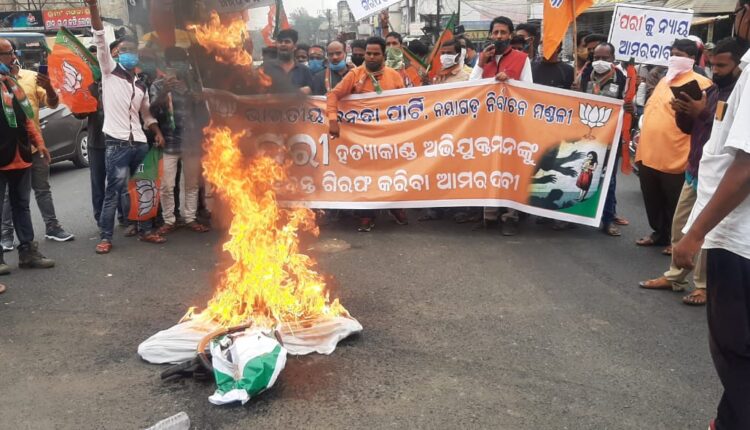 Nayagarh: Intensifying its protest in connection with the murder of five-year-old girl Pari of Jadupur village in Odisha’s Nayagarh, the district unit of the BJP today burnt the effigy of minister Arun Kumar Sahoo at Traffic Chhak here demanding his resignation.

Local leaders of the saffron party alleged that the prime accused of the case is being shielded by the minister, who is also the Nayagarh MLA, for which police are unable to take action against him. They also met the district Collector and submitted a memorandum in this regard.

On the other hand, members of the BJP Mahila Morcha took out a protest rally from party’s state headquarters to Master Canteen in Bhubaneswar demanding immediate arrest of the accused and resignation of the minister.

The deceased girl’s father Ashok Sahoo and mother Saudamini had yesterday attempted self-immolation outside the Odisha Legislative Assembly demanding justice for their daughter. Alleging police inaction in the case, the couple accused minister Arun Kumar Sahoo of shielding accused Babuli Nayak. They claimed that Nayak is a close aide of the Nayagarh MLA.

Notably, the child had gone missing while playing in front of her house on July 14. A few days later, her skeletal remains were found in a bag behind the house. Her parents alleged that Nayak had kidnapped and murdered their daughter.

These places claim to be serving the tastiest Biriyani in India