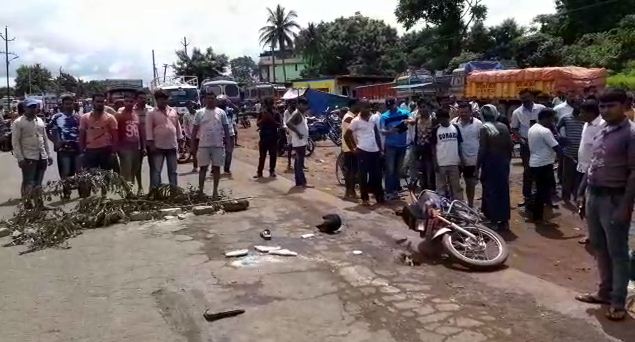 Dhenkanal/Koraput: At least four persons, including a pregnant woman, lost their lives and two others sustained critical injuries in two separate road accidents in Odisha, today.

A speeding truck hit two motorcycles from rear killing a pregnant woman and a youth on NH-55 at Korihan Chhak in Dhenkanal district. The deceased have been identified as Sumitra Sahu and Adhei Swain.

Sumitra was returning home with his husband Pradeep on a motorbike when the mishap took place. Both fell from the two-wheeler after the collision and the truck ran over the woman, leading to her death on the spot.

Moments later, the truck hit another motorcycle on which Adhei Swain and Anil Barik were travelling. While Swain died in the accident, Barik was initially admitted to the Dhenkanal District Headquarters Hospital and later shifted to the SCB Medical College and Hospital in Cuttack.

The truck driver fled the spot after the incident. Police have seized the vehicle and started investigation.

In another incident, two persons died after an unidentified vehicle hit the motorcycle on which they were travelling near Beheraguda under Kundura block of Koraput district. The deceased have been identified as Maheswar Khamar and Chaitanya Kakalgadia. Police have recovered the bodies and sent those to the District Headquarters Hospital for post-mortem.

‘I bribed former Odisha CM to scrap a law’