Quarantined migrants to make space for Amphan-affected people in Odisha 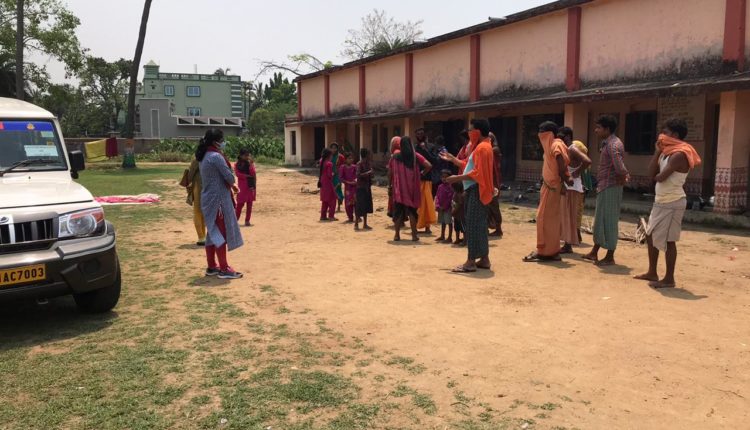 Kendrapara: Cyclone Amphan may have brought trails of misery for many, but it also did pleasantly surprise for some migrant returnees who were asked to vacate the shelter homes in Odisha and undergo home quarantine to make space for the storm-hit people.

Around 2,000 migrants in the coastal districts of the state were exempted from the mandatory institutional quarantine after they tested negative for COVID-19.

“The returnees in temporary health camps (THCs) were subjected to COVID-19 test. And those who tested negative were sent to their respective homes,” Jagatsinghpur District Collector Sangram Mohapatra said. “They were directed to remain under self isolation for 28 days.”

The move was aimed at vacating some of the temporary quarantine centres, which have now doubled up as cyclone shelters, too, he said.

“Altogether 815 people quarantined in 39 health camps were provided with the opportunity to return home and maintain self isolation,” Mohapatra said. “They have submitted a written undertaking that they would not violate the isolation norms.”

All health camps were thoroughly sanitised before converting them into cyclone shelters, he said.

Nearly 45 lakh people in Odisha have been adversely affected by the extremely severe cyclonic storm Amphan, which fiercely went past the state coast and made landfall in West Bengal’s Sunderbans last Wednesday

At least two lakh people were evacuated from the vulnerable areas of the state ahead of the landfall. Several people have also been rendered homeless by the storm.

In Kendrapara, around 250 migrant workers were sent home after their COVID-19 tests confirmed that they have not contacted the infection.

“Eight health camps that had been housing quarantined people over the past two months are now serving as cyclone shelters. Over 250 have been asked to maintain self isolation at home,” Kendrapara District Collector Samarth Verma said.

Those sent home were provided with their COVID-19 test reports amid apprehensions that locals might stop them from entering the villages.

“We have received no report of resistance shown to any of the migrants sent home,” Verma said.

Similar measures were undertaken in parts of Balasore and Bhadrak districts, officials said.

A Gujarat-returned labourer, who was allowed to go home, said he cannot wait to meet his loved ones.

“I had undertaken a long and painful journey to return to Odisha. I so wanted to go home and rest,” said the migrant worker in Balasore who did not wish to be named.

“Now that I have been granted permission, having tested negative for the disease, I can”t wait to meet my family. That said, I will strictly adhere to the social distancing norms,” he added.

In pics: Ahead of resumption of flight services tomorrow, trial run held at Bhubaneswar airport