Tribute to Pulwama Martyrs from Odisha 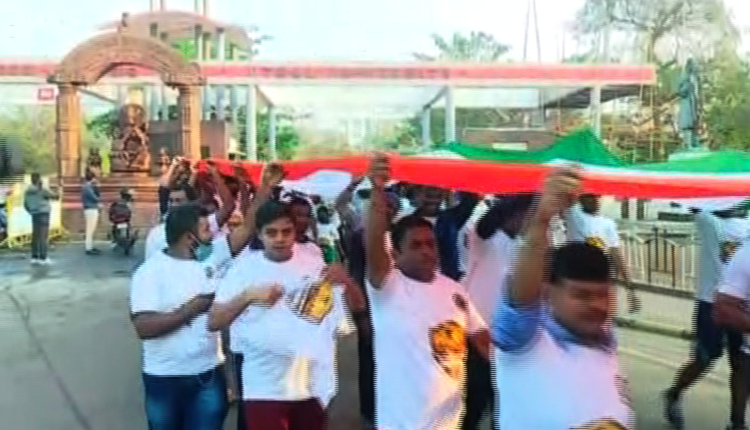 Bhubaneswar: It has been two years when Odisha lost its two brave soldiers in a gruesome terror attack in Pulwama district of Jammu and Kashmir. A rich tribute was paid today to martyrs remembering the incident, which can be termed as the ‘black day’ in Indian history.

A mega rally was organised by the student association of Utkal University in Bhubaneswar as mark of respect to soldiers, who have been martyred for the country.

Holding a 120-metre-long tricolour, thousands of students of the outfit marched from the Utkal University towards Master Canteen Square remembering the noble sacrifices of soldiers that continue to invoke spirit of patriotism among others.

On the occasion, several personalities including retired Army personnel who participated in the event, were felicitated by the Utkal Students Association.

As many as 40 Central Reserve Police Force (CRPF) personnel were killed after a suicide bomber rammed his SUV packed with explosives into a bus ferrying them at Lethapora in the Pulwama district on the Jammu–Srinagar National Highway on February 14, 2019. Two years have been passed, but the pain for losing dear ones is still alive.

Two CRPF Jawans from Odisha — Constable Manoj Behera of Ratanpur village in Cuttack district and Ct/GD Prasanna Sahu of Shikhar village in Jagatsinghpur district — were martyred in Pulwama attack. Entire State mourned the demise of two and everyone’s eyes were filled in tears but with pride for the bravehearts.

On the second anniversary of the terror attack, the families of the martyrs mourned the passing away of their beloved one.

Even after great loss, they appeared more concerned for Nation’s safety and security.

The sacrifices of 40 CRPF Jawans should not go in vain, said martyr Manoj Behera’s wife.

Fire breaks out at Botanical Garden in Odisha capital

Stuck in a house during lockdown, Odisha couple ties knot on Valentine’s Day