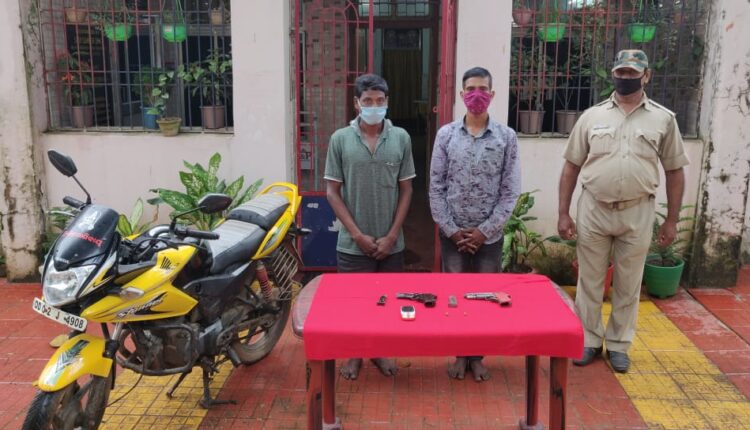 The cops also seized two pistols, two live ammunitions, a motorcycle and a mobile phone from their possession.

The accused identified as Gyana Prakash kara (36), a native of Kantigodia village under Dharmasala police station in Jajpur district and currently staying in a quarter on the campus of Utkal University in Bhubaneswar, had been demanding extortion money from the complainant for the last six months.

As per the complaint lodged by Gyana Prakash Kara, Jitendra Parida along with one of his associates intercepted him near Gundicha temple on Kathajodi Ring Road between 10.30 PM and 11 PM yesterday and started abusing him thereafter while trying to extort him of Rs 20 lakh at gunpoint. However, he managed to escape from the spot and later rushed to Markatnagar police station to report the matter.

During investigation, it was revealed that the accused had been repeatedly calling the complainant since last six months demanding extortion money. He had also allegedly threatened him to shot him to death if he doesn’t give the money.

When Gyana Prakash Kar avoided him, the accused with the help of his associate Govinda Sahoo committed the offence.

Further investigation of the case is underway to find out the network of the crime, said police.