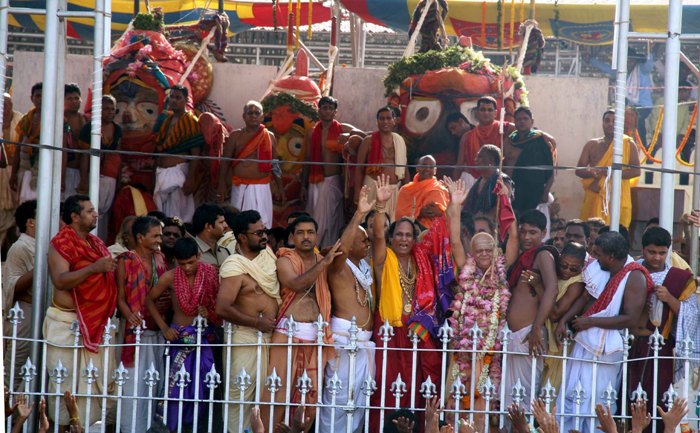 Puri: With barely hours to go for the Snana Yatra (bathing ritual of Lord Jagannath and his siblings) at the Sri Jagannath temple tomorrow, Odisha’s holy town, Puri is agog as it marks the beginning of the annual Rath Yatra of the Lords.

“I am eager to have a darshan of Lord Jagannath the moment I wake up in the morning tomorrow. I will have a darshan of him during the pahandi. I am excited to have his darshan (glimpse) in Gajanan Besha atop the Snana Mandap,” said a woman devotee.

As per schedule, the rituals of Snana Yatra would begin after mangalarpan tomorrow. The Sri Jagannath Temple Administration (SJTA) has decided to complete pahandi carrying of the deities to the Snana Mandap-bathing altar sequentially between 5 AM and 7 AM.

Similarly, jala bije (carrying of water pitchers to the Snana Mandap), puja and bathing of the deities will be completed between 10.30 AM and 12.30 PM.

As many as 108 pitchers of consecrated fragrant water will be used for the bathing of the Lords.

After chhera pahanra (sweeping of the bathing altar floor by Gajapati Dibya Singh Deb) at 1.45 PM, Hati Besha/ Gajanan Besha of the Lords will be completed between 2 PM and 4 PM.

The sahana mela darshan is scheduled to begin at 7 PM and continue till 9.30 PM.

“We have held discussions with the sevayats (servitors) both on an individual basis and in groups for the smooth conduct of nitis (rituals). All have assured that the rituals would not be delayed, everything would be smooth,” informed SJTA Chief Administrator Pradip Jena.

In view of the large footfall of devotees for the grand festival wherein devotees have a chance to have a close darshan of the Lords, elaborate security arrangements have been made by the district administration to maintain law and order and ensure smooth passage of the darshan.

As many as 45 platoons of policemen will be deployed in and around the temple. For surveillance purpose, more number of CCTV cameras has been installed with six alone at the Snana Mandap.

Barricades have been erected in front of the Lions Gate of the Sri Mandir for the smooth darshan of the Lords atop Snana Mandap by the devotees.

Moreover, during sahana mela devotees can have a close view of the Lords atop the Snana Mandap but under no circumstances can go very close to the deities or touch them.

“Special arrangements have been made by the security wing. Besides, intelligence officials will be also keeping a close watch. We wish the thousands of devotees who will visit Puri tomorrow to have a smooth darshan of Lord Jagannath’s Gajanan Besha,” said I G (Central) Soumendra Priyadarshi.

“Barricades will be put up on the Snana Mandap during the sahana mela darshan. Devotees will climb atop the Snana Mandap from one end and after having darshan of the Lords will be required to alight at the other end. Under no circumstances devotees will be allowed to go close to the deities,” said Puri S P Sarthak Sarangi.

Here’s all you need to know about the sacred Debasnana Purnima!