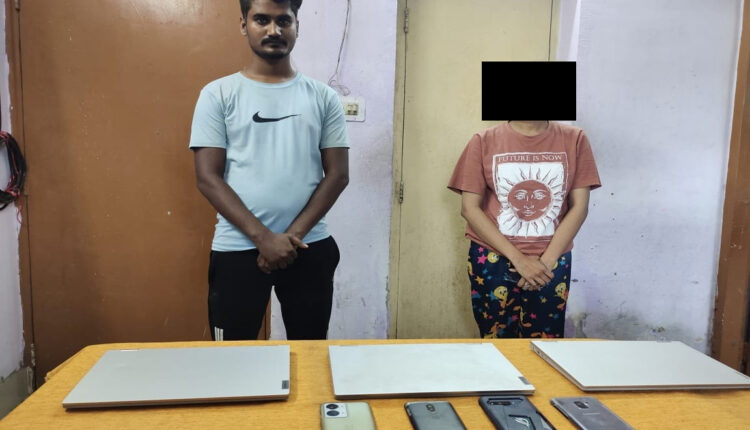 Bhubaneswar: Two accused persons including an MBA girl student were arrested by Commissionerate Police today for allegedly stealing laptops and mobile phones from inmates of a private university hostel under Infocity police limits in Bhubaneswar.

The arrested MBA girl was identified as Puja Saha (22), daughter of Pradeep Kumar Saha of Plot No-7, Sudarshan Tower in Saheed Nagar locality under this police limits and her accomplice as Ahmed Hussain (23), son of Ali Hussain Qureshi of 45/5 DHA Road, Kolkata-27 under Iqbalpur police limits in Alipore district of West Bengal. Presently, Ahmed resides in Room No-401 of Ashirbad Plaza under Infocity police limits of Bhubaneswar Urban Police District (UPD), a press release issued by the Commissionerate Police mentioned.

According to a senior official, an FIR was previously lodged with Infocity police on October 20 in this regard. Acting on which, police have arrested the two history-sheeters and forwarded them to a local court later today.

The two complainants are co-students and reside in the same ladies hostel. Taking advantage of their absence, the accused Puja had allegedly stolen their laptops and mobile phones. Suspecting this, the complainants verified the mobile phone of Puja and ascertained that huge financial transactions were carried out. Taking a hint from the transactions, Infocity police arrested the accused duo.

During the primary investigation, Puja admitted to her crime. She also confessed her involvement in another such crime committed by her on September 16, 2022. The girl used to hand over the stolen items to her accomplice Ahmed for sale and was receiving payment against the illegal deals.

Meanwhile, Ahmed has also confessed his involvement in the alleged thefts of electronic gadgets.

Infocity police have seized three laptops of different make and models, four costly mobile phones from the possession of Puja and Ahmed. Police have initiated a detailed probe, which is underway.