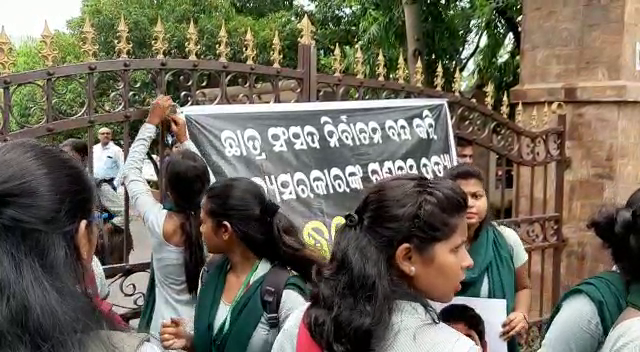 Condemning the state government’s decision to cancel the polls at colleges and universities, the agitating students staged a dharna in front of the varsity’s gate. They termed the government’s move as ‘murder of democracy.

A clash also erupted between two groups of students after some protestors smeared ink on posters of Higher Education Minister Arun Sahoo by holding him responsible for such decision.

Normalcy returned to the university campus after intervention of police, who managed to pacify the students.

It can be mentioned that the Higher Education department has decided to cancel the students union poll this year in all the degree colleges and universities this year.

In this regard, Higher Education Secretary Saswat Mishra on August 22 has apprised all vice-chancellors of universities and principals of degree colleges about the decision through a letter.

Instead of election, the government has decided to nominate students’ representatives to various educational bodies.